For a long time, University of Oklahoma graduate and retired business executive James Spann has been watching OU innovations take flight. The problem was, they were flying to places like Austin, Texas, and Boulder, Colorado, where they found financial backing needed to succeed.

Spann is now hoping to stop that migration with a new venture capital firm dedicated to OU enterprises in various stages of development in Norman and Oklahoma City. He is founder and managing partner of Boyd Street Ventures, which will officially open its office Friday on Campus Corner, near OU.

“I love OU and I’m doing everything I can to help the university be successful,” said Spann, who is moving from his homes in Phoenix and San Diego to Norman, where he will be working full time with investors and a long list of prospective entrepreneurs.

Spann said the firm began raising capital last January and expects to reach its $25 million goal by the end of the year. He plans to raise another $25 million in 2023. Half the investment fund will come from OU alumni and the other half will come from institutional investors, such as banks and retirement funds.

Boyd Street Ventures may just be opening, but investment money is already flowing with nearly $750,000 in grants awarded to four OU startups, and Spann’s goal is to make a total of 10 grants by the end of the year.

Finding prospective investments is not a problem. There are about 300 potential startups at OU, he said. If the capital were available, Boyd Street Ventures could invest in 20 or 30 startups a year.

Jeff Moore, executive director of OU’s Ronnie K. Irani Center for the Creation of Economic Wealth, called the firm a missing link to the eventual success of widespread commercialization of ideas coming out of OU.

“It’s an important link, but it’s not the only link,” said Moore, who also serves as Boyd Street’s co-founder and strategic adviser.

Beyond Boyd Street, even more capital is necessary, he said. So, to complete OU’s mission, the firm must spawn successful enterprises, and the more successes there are, the more outside capital will come to OU.

Spann said Norman can be overlooked by venture capital investors, who tend to focus on prospective enterprises at universities on the East and West coasts, but those opportunities can be overbid and overpriced.

While most venture capital firms only provide financial support, Spann said Boyd Street provides more. In addition to funding, Boyd Street can connect OU affiliated entrepreneurs to OU support programs, such as the Office of Innovation and Corporate Partnerships, the Tom Love Innovation Hub, and the Center for Creation of Economic Wealth. The three OU programs have been set up by the university to provide resources, expertise, and services to startups.

OU enterprises may fly below the radar, Spann said, but through support from Boyd Street Ventures, they can fly above the clouds. 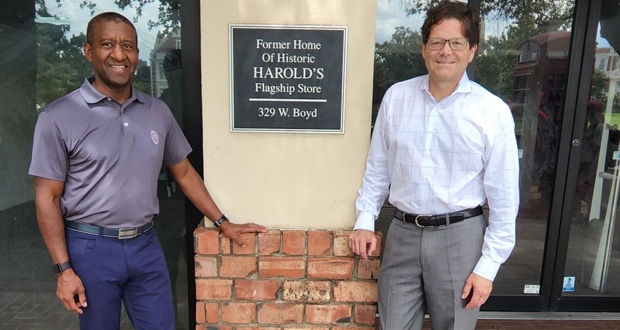