Continuing our Investor Mindset series, we got together with John Richards, Tyler Richards, and Jordan Harbertson, co-founders of a new fund, Startup Ignition Ventures at the 11th Startup Ignition Alumni Reunion at Utah Valley University. We learned about this new early-stage fund, met the team (sans Sterling Sessions who was unavailable), and witnessed the legendary Startup Ignition networking experience of hundreds of entrepreneurs coming together for an evening of inspiring speeches, networking, and a big announcement.

Startup Ignition was founded by John Richards, one of Utah’s most prolific startup investors and mentors. He and his co-founders announced recently their launch of a new $20 million early stage venture fund called Startup Ignition Ventures (SIV). Unlike most ventures, SIV is focused on pre-seed investments, including pre-revenue ventures, “writing the first checks” to fresh startups. Typical SIV investments will amount to $250,000 to $750,000 and will likely involve a follow-on investment of similar size based on performance and traction.

SIV is managed by Richards and his son Tyler, founder of DevMountain and an avid angel investor himself. They are joined by Sterling Sessions and Jordan Harbertson, Co-Founders and Partners in SIV. 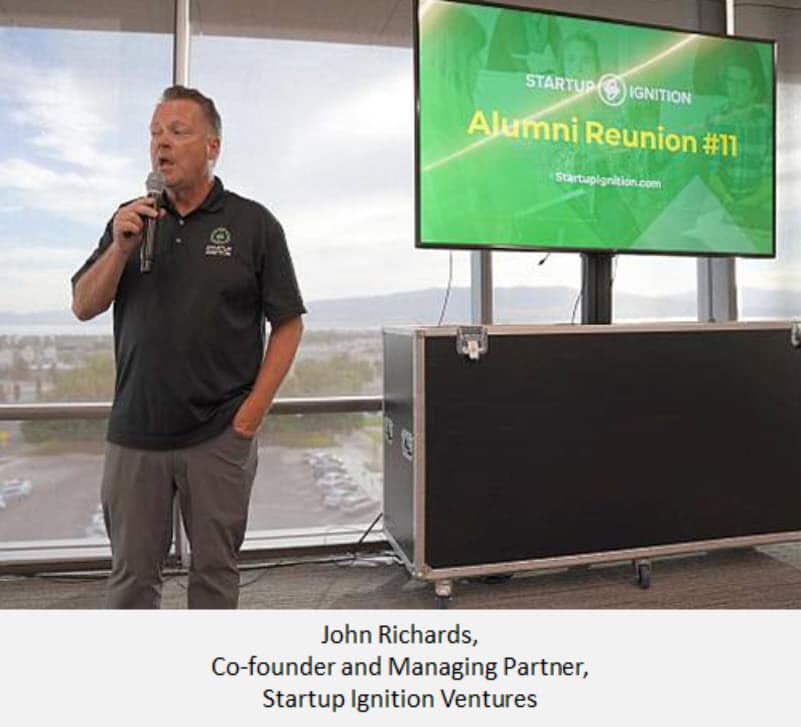 John Richards is Managing Partner of the new fund. His background as a Utah investor and mentor of startups is extensive, with direct investments in over 100 startups and hundreds of others as a limited partner himself in various venture funds. Richards was a member of the now-sunset Utah Angels for more than a decade and served several years as its Managing Partner. He is also a former BYU professor, where he mentored thousands of startups led by student teams which over two decades has grown into a very large network of both new and proven entrepreneurs and operators. When his graduates come together at networking events, such as the recent reunion at UVU’s new Keller Building, the result is “many collisions of people and ideas resulting in a natural, organic formation of startup teams,” says Richards.

The new fund’s general partners will follow an investment approach deeply rooted in Lean Startup methodology which they have applied with precision to dozens of previous startup investments with excellent results. TechBuzz sat down with the partners of SIV during the reunion and discussed the fund’s investment strategy.

“Our slogan is ‘From Idea to Exit.’ Our vision is to take startups from the first idea, to getting their first investment, and marshaling and helping them along the way,” says Richards.

SIV will use Lean Startup and business model validation concepts to identify promising startups and then get into the trenches with the teams to help wherever needed without being overbearing. As a father-son team, the Richards have done this with success many times. The fund allows them to go wider and deeper.

“We have a process that’s been honed over many years, largely rooted in Lean Startup, and involving very hands-on mentoring. It allows us to identify winners,” explains Richards.

“It’s not just about money; the secret is actually a focus on seemingly ancillary issues that sometimes don’t involve money, but they involve know-how, like how do you land a great CTO? How do you write the first contracts with your customers? How do you go after the market?

Like Loading...
Read More »
PrevPreviousWhat is in the CHIPS bill? – The Washington Post
NextNew Mind the Gap 2022 Report is Must-Have Tool for Research Institution Gap Funding and Accelerator ProgramsNext