or the second year, ASU will host an innovation contest with a grand prize of $100,000 for any college entrepreneur with enough savvy to impress a panel of business and tech experts.

The ASU Innovation Open is a contest that partners with electronics distributor Avnet and others to showcase innovative entrepreneurs around the world.

To apply to the competition, students must submit a 5-minute pitch video that shows how they plan to solve a problem with technology. Judges will select 15 ventures to move on to the semi-finals, and five of those will move to the championship round.

The winner of the Open will be announced at the Waste Management Phoenix Open in February.

Brent Sebold, director of venture development at ASU, said there are 290 student-run ventures, but many of them are not prepared for this competition. 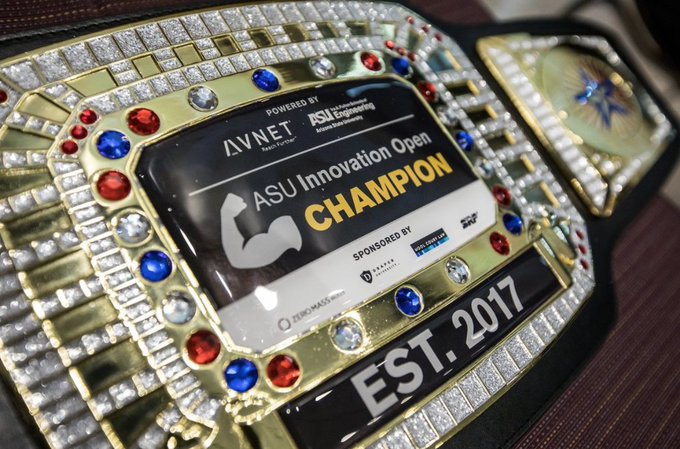 “Of those 290 (ventures) there is a very small percentage that would be able to make the case that they would be able to very effectively leverage $100,000,” he said. “If you’re asking for $100,000, you need to have a coherent plan of how you’re going to spend that.”

Sebold said the chance of winning should not deter students from starting ventures.

“You could equate the Open to the varsity level of entrepreneurship at ASU, but the good news is we have a huge amount of money equally devoted to those who are playing T-ball and intramurals,” he said.

Sebold said the Open focuses on feedback for its participants.

“We see this as a teachable moment for everyone who takes the time to apply,” he said. “You are going to get some kind of feedback. We want to help you understand why or why not you advanced or did not advance.”

Melissa Gray, the vice president of community affairs for Avnet, said good feedback is an important part of the competition, which is why they carefully select the judges.

Gray said this is her first year working for Avnet, and that she is looking forward to seeing students’ ideas in the competition.

“I talked to many student participants as well as the leaders that were involved (last year), and what I saw was a high level of professionalism with fully vetted ideas that had sound business cases and great feedback from leaders,” she said.

Gray also said the Avnet is involved in the competition because they want to see innovators’ ideas become a reality.

“We help people take their ideas from a napkin sketch all the way to production,” she said.

Last year’s winner was a company called Somatic Labs, creator of a smartwatch called Moment. The company was co-founded by ASU grads Shantanu Bala and Ajay Karpur, as well as current U of A student Jacob Rockland.

The watch is a “wearable device that communicates information through your sense of touch,” Bala said.

Bala was a computer science and psychology major who graduated in December 2014.

Bala, the current CEO of Somatic Labs, said they did not expect to win.

“We didn’t really think we would get the prize money or that anything was going to happen,” he said. “We sent it more out of curiosity.”

Bala said his advice for students who want to apply would be to listen to the judges.

“They help you along the way and get you to a point where you’re presenting something that’s a solid concept for a business,” he said. “The process isn’t about just picking a winner, but giving you feedback and helping you grow.”

WEST LAFAYETTE, Ind. – Senteon, a cybersecurity startup founded by Purdue University alumni, completed a round of seed funding that includes an investment from the Purdue Startup

GRAND RAPIDS, Mich.  — In conjunction with the opening of their brand-new business school, and thanks to a generous alumnus, Calvin University is launching a unique

The U.S National Science Foundation is tackling challenges related to climate, sustainability, food, energy, pollution and the economy through a $30 million investment to advance